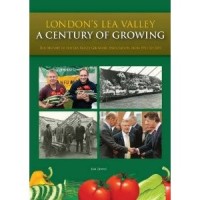 Dr Jim Lewis has spent most of his career in the consumer electronics industry, apart from a three-year spell in the Royal Air Force servicing airborne and ground wireless communications equipment.

When working in the Lea Valley for Thorn EMI Ferguson he represented the company abroad on several occasions and was involved in the exchange of manufacturing technology. Currently he is a Consultant to Terry Farrell & Partners on the historical development of London’s Lea Valley and a Workers’ Educational
Association (WEA) tutor teaching industrial history.

On Tuesday 22nd February 2011, to commemorate the centenary of the Lea Valley Growers’ Association, the Smallford Nurseries in St Albans were honoured by a visit from His Royal Highness, The Duke of Kent. It marked the survival and tenacity of an extraordinary organisation.

In 1911 the Lea Valley Growers’ Association was set up with the goal of representing growers on a political lobbying front. The emphasis changed over the years but today the LVGA is firmly representing growers again not just at local and national MP level but also encroaching into Brussels with regular contact with our MEPs.

The Lea Valley Growers’ Association, in its hundred-year history, has survived two World Wars, numerous storms, heat waves, freezes, floods, fuel shortages, including the Middle East oil crisis and on more than one occasion a global meltdown of the money markets .

All these difficulties, while being financially challenging, have been overcome and the Lea Valley growers have shown much ingenuity and resilience. This book celebrates an industry that has helped feed Britain so that future generations can benefit from a supply of fresh food grown by an environmentally conscious organisation.

Purchase the book for £15.00 from the Secretary or £25 from Amazon.com

9am to 5pm Monday to Friday

Find out the latest news at Lea Valley Growers Association.